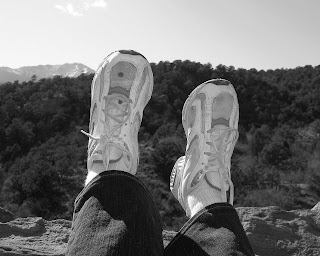 As 2009 comes to an end, I can’t help but reflect on what an amazing year it has been! It seems like it was just yesterday that we were unpacking our U-Haul after a 3 day, 1200 mile drive through two snow storms from Detroit to Denver. But in January we will celebrate our one year anniversary of living in Colorado.

As we unpacked and got settled into our new apartment I set the intention that in 2009 I would make more time to paint. Not knowing anyone but each other, and no longer having a house and a yard to maintain, I would have more time to dedicate to my creative expression. I think back to my younger self just 11 months ago and I smile as I reflect on the fact that I had no idea what was in store for me when I got here!

Colorado is an adventurous state with many of its residents being avid outdoor types. But navigating the Denver art scene is an adventure in itself! And I have only just begun to scratch the proverbial surface of artists to meet and galleries and museums to explore. Michigan has its renowned Detroit Institute of Art museum and metro-Detroit is peppered with the occasional art gallery. But there is nothing comparable to the Sante Fe and Rino art districts. Imagine my joy as I began to learn what a vibrant art community Denver has!

I’ve been painting on and off my entire life, but it wasn’t until I moved to Denver that I had the opportunity to start showing my work. If you would have told me a year ago that I’d spend 2009 participating in multiple group art shows and that I’d close the year with a two month solo art exhibit I wouldn’t have believed you. I had no frame of reference from where I came from that the experiences I’ve had this year were possible.

As 2010 approaches I am excited with anxious anticipation for what the New Year has in store. So much so that sometimes it’s hard to live in the moment. There is so much I want to do, to see, to experience that I feel this sense of urgency. I want to do it all and I want to do it now! I’m almost overwhelmed with the choices and paths that lay before me. I could pursue so many different avenues, and while each one would be different, they would each be an adventure I would never forget.

While 2009 has been the best year of my life, I am confident that 2010 will be even better. But I have to remember that I’m here, in this moment, and that it’s really all I have. Yesterday is over and I don’t know what tomorrow will bring. But I’m here – living, learning, and loving everything I can about life.
Posted by Marcella Nordbeck-Richardson at 1:23 AM 1 comment:

"We are ALL artists - the artists of our lives! What are YOU creating today?" 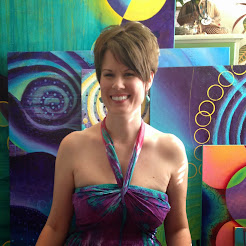 is an Artist, Writer, and Creative Life Coach who is living creatively. She believes we are ALL artists - the artists of our lives. Known for painting spirals inspired by her experiences while meditating, Marcella works on canvas, wood, and paper, with acrylic, latex, and watercolor paints, Golden acrylic fluids and mediums, and mixed media elements including paper, plastic, fabric, and fiber. She particularly enjoys working with ephemera that is repurposed and saved from a landfill. For more information, visit www.MarcellaNordbeck.com

I endorse Flora Bowley's online intuitive painting class. Flora's next "Bloom True: the e-course" will run for 5 weeks starting on October 13, 2014. Previous classes SOLD OUT! Click on image above to register today!

Other Places To Find Me